30 kms east of Malaga on the A-7 motorway or the N-340 that runs parallel to the coastline. 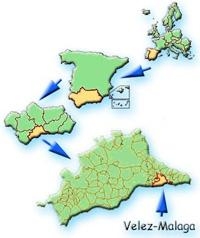 Features: This municipality is the capital of the Axarquia Region with 31 localities and it is located in the eastern part of Malaga province. The municipality of Velez Malaga consists of eleven populated areas out of which, eight are found on the coastline (Torre del Mar, Caleta de Velez, Mezquitilla, Lagos, Almayate, Benajarafe and Chilches) and four are located inland: Velez Malaga, Triana, Trapiche and Cajiz.